Here is today’s global markets round-up from eToro, which I’m sending instead of Adam. You can get in touch with either of us if you have any follow up questions.

Despite stock futures trading negatively over the weekend and continued unrest in cities across the US, major indices in America and around the world started off June on a positive note. The S&P 500 was up 0.4% and the FTSE 100 gained 1.5%, while Asian indices also rose. Mass protests raged across the US again on Monday, leading to curfews being imposed in New York and San Francisco, while the National Guard was called in response to protests in Washington, DC that led to fires being set outside the White House.

A spike in Covid-19 cases is expected to result from the protests, potentially disrupting the US recovery from the pandemic – optimism around which has been the main force driving the recent stock market surge. It was reported on Monday that President Trump called US governors “weak” and told them to “dominate” the protestors. Chinese officials have also jumped on the chance to criticise the Trump administration for how it has responded to the protests, arguing that he is a hypocrite after the President publicly supported protests in Hong Kong. China’s state media also hit back at President Trump’s announcement that he plans to strip Hong Kong of its special trade and travel status with the US, as tensions continue to rise between the two superpowers.

The real estate and energy sectors were the biggest winners in the S&P 500 on Monday, while the health-care sector found itself in the red. Financial stocks also made progress, with the consumer finance sub sector leading the way with a 2.2% gain. The S&P 500 was led by double-digit gains from beauty firm Coty, clothing retailer Gap and Norwegian Cruise Lines, although the three stocks are still down 61%, 44% and 70% year-to-date respectively.

Out of the three major US stock indices, the tech heavy Nasdaq Composite had the best start to the week, gaining 0.7%, with its year-to-date gain now standing at 6.5%. The index has risen this year while the S&P 500 and Dow remain in negative territory, as investors are betting that a post-pandemic economy focused around remote working and cloud computing will disproportionately benefit many of the tech firms that make up a large proportion of the Nasdaq. Tesla helped take the index higher on Monday, gaining 7.6% after Elon Musk’s other venture, SpaceX, successfully docked a spacecraft with the International Space Station.

Ryanair made headlines late on Monday in New York, where the firm failed to get a judge to throw out a securities fraud lawsuit, with district judge Paul Oetken saying that shareholders could attempt to prove it misled shareholders over its views on labour unions. It was also reported that a London Stock Exchange public consultation has found strong support for cutting stock market trading hours in the UK, which are substantially longer than in the US. The hope is that cutting the burden of trading hours would help to improve gender diversity and mental health in the financial sector.

Zoom Video Communication: The rise of Zoom has been dramatically accelerated by the coronavirus pandemic, which has propelled it into both the public consciousness and companies worldwide. The company’s share price gained 13% on Monday ahead of its latest set of quarterly earnings on Tuesday, as investors are widely expecting an impressive quarter. Zoom stock is now up 200% year-to-date, and investors will be watching for data or commentary that justifies that valuation. Of interest in the firm’s earnings report will be how big the revenue rise has actually been, how it has fed through to Zoom’s bottom line, and how it plans to keep the clients it is winning during this period. How the company is addressing negative press coverage relating to security and privacy issues will also likely be front and centre.

Crowdstrike: Cybersecurity company Crowdstrike has been another beneficiary of the coronavirus pandemic, as demand for its services – which include machine learning based anti-virus and threat intelligence – is likely to be driven by a shift to remote working and cloud-based IT infrastructure. The company’s stock is up 90% in 2020 so far, and its share price currently stands at $94.84, versus its $34 IPO price. Crowdstrike reports quarterly earnings on Tuesday. Currently, 15 Wall Street analysts rate the stock as a buy, four as a hold, and two as an underweight or sell.

US car sales: In economic data, US car sales data for May will be reported on Tuesday, where economists are anticipating a bounce back in volume versus April. Expectations are for just over a million vehicles to have shifted in the US in May, a major recovery compared to April, when the figure came in at 633,000. A figure of 1.1 million would still be a third lower than May 2019, but investors in auto stocks will be hoping for signs of life from the vehicle market as the crucial summer sales season kicks in.

Bitcoin, the world’s best-known cryptoasset, surged through a the symbolic $10,000 value for the first time since 8 May to reach a high for 2020.

The cryptoasset rose steadily through yesterday before a surge late on, peaking at $10,428, the highest level since the coronavirus crisis began. Bitcoin’s previous high for 2020 was $10,371 on 15 February, before news of the spread of coronavirus had begun to affect markets. This morning, Bitcoin fell back somewhat, trading around $10,082 early on today, just under a 6% gain in 24 hours. There is a long standing resistance level just below the $10,400 mark which has proved to be a tough hurdle several times over the last 9 months. 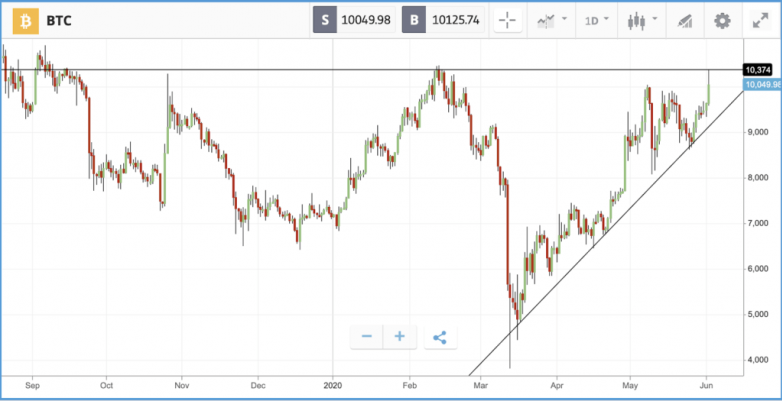 Elsewhere Ethereum and XRP rose too, albeit more modestly. Ethereum gained around 4% in the last 24 hours and is now trading around $248. Likewise, XRP was up just over 3%, to around $0.2107 early this morning.

All figures, data and charts are accurate as of 02/06/2020. All trading carries risk, only risk capital you can afford to lose