US stock futures climbed in overnight trading on Sunday as reports emerged that President Trump plans to circumvent US regulations in order to allow the use of an experimental Covid-19 vaccine. The FT, citing three people briefed on the plan, said that the Trump administration wants the vaccine – developed in the UK by AstraZeneca and Oxford University – put into action before the presidential election in November. Currently, more than 60% of Americans disapprove of the President’s handling of the pandemic, and the successful introduction of a vaccine might allow Trump to boost his chances. Elsewhere over the weekend, the US Food and Drug Administration authorised the use of convalescent plasma taken from recovered Covid-19 patients to treat serious cases.

In economic news, on Friday data was released showing that sales of existing homes in the US jumped 25% in July versus the previous month and 9% year-over-year, beating economists’ expectations as pent up demand was released.

Growth and large cap stocks continued to dominate value and smaller-cap stocks last week, with the Nasdaq Composite surging close to 3%, while the Dow Jones Industrial Average was flat and the S&P 500 delivered a modest gain. Apple was a significant driver behind the market rally, adding 8.2%, with its market cap surging past $2trn in the middle of the week and closing out Friday past $2.1trn. Despite record highs for both the S&P 500 and Nasdaq Composite, analysts at Edward Jones highlighted in a Friday note that Q2 corporate profits came in 40% down on last year. They added that the economic recovery from here is likely to be uneven, pointing to the contrast between housing market strength and continued labour market weakness. “A new record high can’t erase all the risks to the economy of the biggest health emergency in 100 years,” they added. 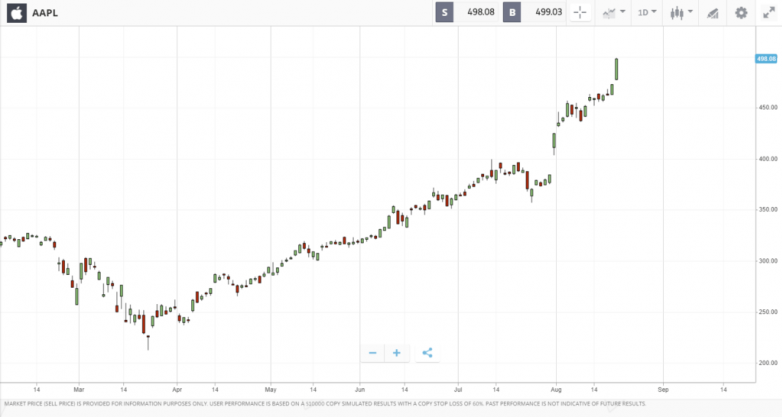 The FTSE 100 and FTSE 250 once again struggled to find any momentum last week, sinking 1.5% and 0.9% respectively, as both indices continued to track sideways. UK economic data last week showed some improvement in a variety of areas, with positive retail sales growth, plus a marginal gain in manufacturing and industrial sector figures. However, similar to the US, the UK economy is recovering unevenly. While retail sales numbers beat economist expectations, manufacturing sector orders disappointed. On Friday, InterContinental Hotels Group was a standout in the FTSE 100, adding 6.2% after rumours of a merger deal with French hotel firm Accor. A deal would create the world’s largest hotel chain. The company’s share price is still down 17.8% year-to-date but has rallied 17.4% over the past three months.

Palo Alto Networks: Cybersecurity firm Palo Alto Networks has been a beneficiary of the mass shift to virtual working, adding 16.5% to its share price year-to-date, although that pales in comparison to the 125% gain delivered by fellow cybersecurity name Crowdstrike, and Okta’s 81% gain. The company delivers its latest quarterly earnings on Monday, after reporting a jump in sales last quarter, with management predicting that trend would continue as firms shift to digital-only working practices. Currently, 26 Wall Street analysts rate the stock as a buy or overweight, and 11 as a hold.

Chicago Fed National Activity Index: The only major economic data point being reported on Monday is the Chicago Fed’s July national activity index, which is a composite of 85 different monthly indicators of US economic activity. A zero value indicates that the national economy is growing at its historical trend rate, with positive values indicating growth. Per Trading Economics, the forecast value for July is 2, after a 4.11 in June. The three-month moving average of the index was -3.49 in June, an improvement on -6.36 in May and -7.52 in April.

When will Apple hit three trillion?

It took Apple more than 35 years to go from its initial public offering to becoming the world’s first trillion dollar publicly listed company in just two years. After the company’s IPO, it took the firm close to two years to hit $1.5trn, and just two months to get past the $2trn mark. Currently, the market cap of Apple is equivalent to that of the entire FTSE 100, and it has a 7.2% weighting in the S&P 500 index. The transition to 5G technology is one major factor that could propel the company past the $3trn mark, as there is the potential for hundreds of millions of iPhones worldwide to be upgraded by consumers. CEO Tim Cook has also placed a major emphasis in recent years on transitioning Apple away from being a pure hardware business, growing service segments such as the app store, Apple Music, the Apple credit card, warranties and more. “The reason we’re talking about … $2trn when it feels like it was just passing $1trn is just how well they’ve done vertically, integrating through their technology stack, starting with hardware, and then now moving into software,” Ark Invest analyst Nick Grous told CNBC.

Hong Kong’s markets regulator has agreed in principle to issue a license to a cryptoasset firm for the first time. OSL Digital Securities, part of Fidelity-backed BC Group, said on Friday it had received the approval in principle, according to a Reuters report.

OSL first said last November it had become the first firm to apply for a digital asset license from Hong Kong’s Securities and Futures Commission (SFC) under new rules allowing crypto exchanges to opt into regulation. No other company has so far said it has received such approval.

The approval comes amid a pause for leading cryptoasset Bitcoin. Having set new highs for the year a week ago, Bitcoin has retreated below the $12,000 mark and is now trading at $11,652 as investors look for the next event to spark more buying.

All data, figures & charts are valid as of 24/08/2020. All trading carries risk. Only risk capital you can afford to lose