Market futures swing wildly as US election too close to call

Market futures in the US and further afield are choppy as the US Presidential election is currently still too close to call, with investors’ expectations of a ‘Blue Wave’ victory for the Democrats in the White House, Senate and House, looking increasingly unlikely.

US government bonds and stock futures all fluctuated wildly overnight as uncertainty over the election result mounted. Many states have declared, but some key battleground states are still too close to call, with absentee ballots taking much longer to count. 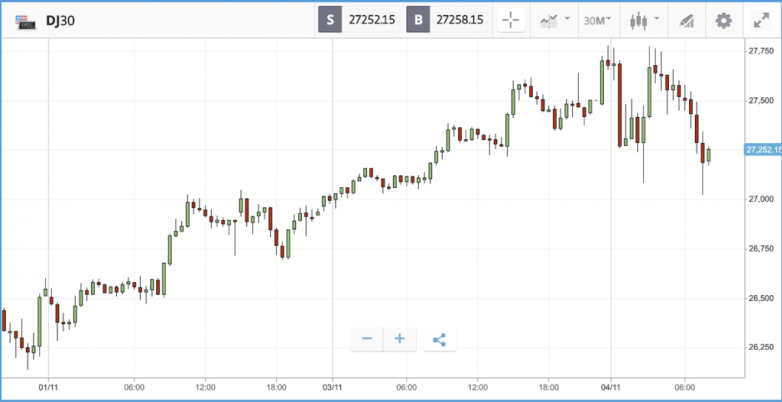 States including Pennsylvania, Michigan and Wisconsin – all key states taken from the Democrats by Trump in 2016 – are undecided so far but leaning Republican. The lack of clarity reflects a difficult moment for markets as uncertainty over who wins could extend for days, and perhaps weeks if results are disputed in the courts.

European markets have opened down as uncertainty prevails with the FTSE and Dax down 1 and 1.5% respectively. Expect trading to be particularly volatile today across the board and likely for the rest of the week.

Stocks gained across the board on Tuesday ahead of election

On Tuesday all three of the major US stock indices made substantial gains, with the Dow Jones Industrial Average the biggest winner at 2.1% as investor optimism before election polls closed manifesting in buying activity across sectors. In total, 27 of the Dow’s 30 constituent stocks enjoyed a positive day, with none of the remaining three falling by more than 1%. Companies in a wide range of industries led the way, with Walgreens Boots, Goldman Sachs, Boeing and Walt Disney all up by more than 3%. Similarly, 10 of the S&P 500’s 11 sectors posted a positive day, with the industrials, financials and consumer discretionary sectors all gaining more than 2%.

Not all gains were election driven. Network equipment firm Arista Networks led the S&P 500 with a 15.4% gain after delivering expectation beating third-quarter revenue and profit figures. That is despite companies cutting back or delaying spending on network infrastructure due to the pandemic.

Similar to the US, London-listed shares were up across the board yesterday, with the FTSE 100 gaining 2.3% and the FTSE 250 up by 1.8%. Rolls-Royce, Natwest and Taylor Wimpey led the FTSE 100, with gains of 9.7%, 7.3% and 6.9% respectively. Banks were up across the board, with Barclays, Lloyds and HSBC all closing more than 4% higher. The FTSE 250 was led by housebuilder Crest Nicholson, which gained 16.5% after raising its profit forecast on the back of robust sales figures. The firm also announced it plans to reinstate its dividend. Broadly, homebuilders have been benefiting from demand that built up during the UK’s first lockdown, and homeowners looking for larger properties while stuck working from home.

Qualcomm: Chipmaker and wireless tech firm Qualcomm’s share price is up by more than 40% in 2020 so far, boosted in part by optimism around the mass rollout of 5G technology powered by the firm’s chips. A key point of focus when the company delivers its latest set of quarterly earnings on Wednesday will be the firm’s relationship with Apple, as the smartphone giant’s new 5G iPhones have now hit the market. Currently, 20 Wall Street analysts rate the firm as a buy, 7 as a hold, and two as an underweight or sell.

Public Storage: Self-storage firm Public Storage, which has a $40bn market cap, has gained 10.6% year-to-date after a 16.9% rally over the past three months. The company delivers its Q3 results today, the key points to watch will be the level of rent per square foot the company has been able to charge and how self-storage demand has sustained with fewer people moving house during the pandemic. Difficulty collecting payments from customers facing financial hardship due to the economic challenges of the pandemic may also be a factor. Currently, analysts favour a hold rating on the stock.

Hilton Worldwide: Hotel giant Hilton’s share price has recovered substantially over the past three months, gaining 15.7% to take its year-to-date loss below 20%. That is despite the Covid-19 pandemic decimating the travel and events industries that the firm relies on to generate demand for hotel rooms. The company reports quarterly earnings results today, the contribution of the firm’s properties in countries such as China where there are fewer Covid-19 restrictions in place will be key to watch. Wall Street analysts are split between buy and hold ratings on the stock.

The cost of making transactions on the Ethereum blockchain has halved in October as hype surrounding decentralised finance (DeFi) cools, according to Coindesk.

Users of the Ethereum blockchain saw fees drop 65% between September and October – $57 million, down from a record $166 million.

Trading volume on the network declined for the first time since April, down nearly 25% to $19.4 billion-worth of transactions. In September, activity was so high on the Ethereum network that miners there earned six times more than bitcoin miners.

All data, figures & charts are valid as of 04/11/2020. All trading carries risk. Only risk capital you can afford to lose

We are proud to announce that Global Forex Awards 2020 has awarded us with:Global Forex Broker of the Year Best Forex Affiliate Broker Programme -...
Read more

One of the reasons why many traders begin to use FBS Trader is Quick Start bonus. The seven-step onboarding bonus with $100 to trade...
Read more

December is here. Snowflakes are falling silently outside the window... So, it is time for a cup of hot chocolate, a warm and cozy...
Read more

We are proud to announce that Global Forex Awards 2020 has awarded us with:Global Forex Broker of the Year Best Forex Affiliate Broker Programme -...
Read more

One of the reasons why many traders begin to use FBS Trader is Quick Start bonus. The seven-step onboarding bonus with $100 to trade...
Read more

December is here. Snowflakes are falling silently outside the window... So, it is time for a cup of hot chocolate, a warm and cozy...
Read more

OPEC will resume talks today with a view to planning for 2021 and the continuation of output cuts to support the oil price in...
Read more